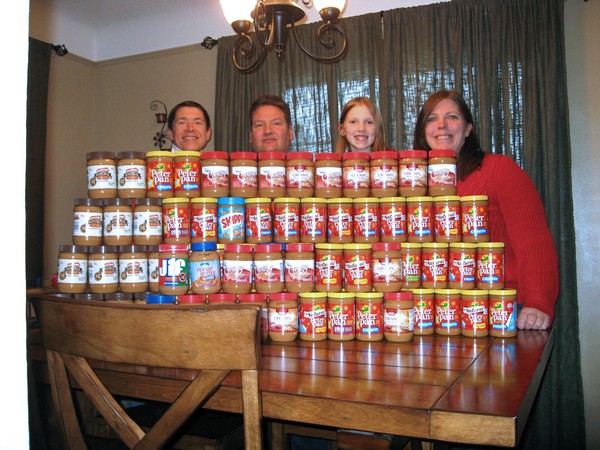 “It’s high protein, calorie dense and has a good shelf life,” Visnauskas said. “In general, people enjoy peanut butter, but not everyone enjoys beets or sauerkraut or peas.”

That’s the reason why the Old Brooklyn nonprofit, which serves Parma, Parma Heights another local communities, is holding its 7th annual Parma Peanut Butter Drive now through the end of the month.

“The other thing we want people to know as a food bank agency, we can access peanut butter at a less-than-wholesale price,” Visnauskas said. “So people can also donate online.”

Visnauskas said the successful drive, which this year he hopes will bring in a ton of peanut butter, was the inspiration of Parma City Council President Sean Brennan.

“My mom was a single mother who worked hard to make ends meet,” Brennan said. “Looking back, peanut butter was our main source of protein. When I saw peanut butter prices spiking, I called John at All Faiths and asked what he thought about The Parma Peanut Butter Drive.

“He liked the idea. Here we are seven years later after raising thousands of dollars and thousands of pounds of peanut butter to help feed the needy residents.”

“It gets people talking about senior hunger and how that’s different than really dealing with intergenerational poverty and those neighborhoods that have been perennially impoverished,” Visnauskas said.

“All Faiths Pantry is more about how poverty has migrated to the suburbs and how people fall into poverty because of their mobility impairment or age.”

Over the last decade, All Faiths Pantry has surpassed 53,000 home deliveries, totaling more than a million and a half pounds of food that fed local seniors on fixed incomes who don’t access emergency food assistance from other food bank programs.

“In the case of seniors, a lot of times they don’t consider themselves poor even though they don’t even make $1,000 a month,” Visnauskas said. “A lot of times seniors don’t want to take food from the poor.”

When one thinks of peanut butter, naturally jelly also comes to mind.

“I’ve heard that before, but I’m not really a foodie,” Visnauskas laughed. “Sure, jelly is great and other people ask that, but we don’t generally do food drives year-round.”